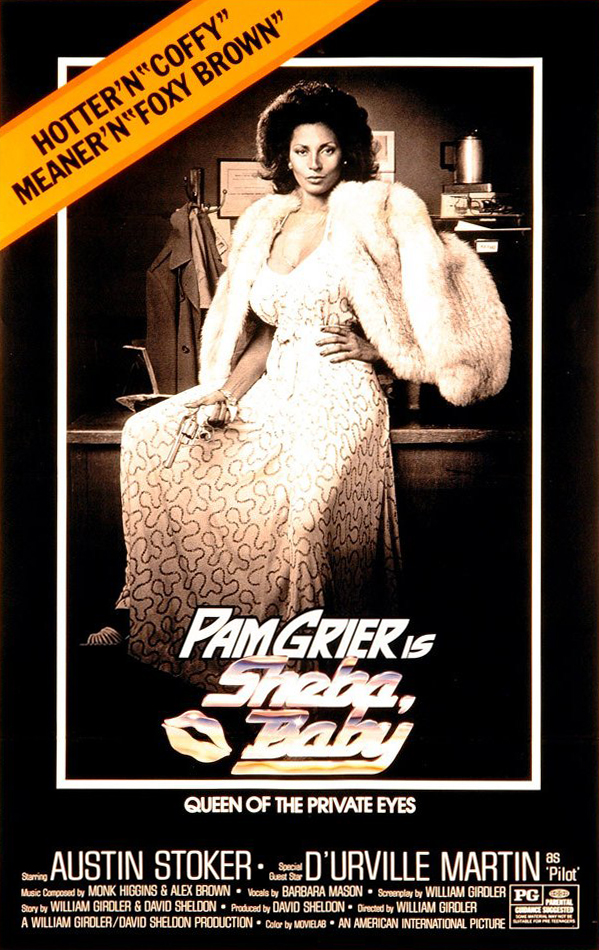 A Chicago private detective returns back home to Louisville, Kentucky, to help her father fight mobsters.

Writer David Sheldon was given the task of writing a script for Pam Grier that was less edgy than the movies Jack Hill had been making. He wrote "Honor" almost literally overnight, which was transformed into "Sheba, baby" by the PR department, and Sheldon was also put on as a producer. This was a huge promotion for Sheldon, who had been at AIP as Larry Gordon's assistant (and later "director of development", which essentially means script reader).

For me, the blaxploitation subgenre is an interesting one -- did people dress like this? Now, I did not live through the 1970s nor did I grow up in a big city. But I feel like the "pimp" clothes and similar styles were more likely created in the movies and adopted in real life than the other way around. What is especially interesting is that most of the people involved in the subgenre were white... so this was very much how the black community was perceived rather than how it actually was.

One exception to this in "Sheba" might be the character of "Killer", played by Maurice Downs. Downs was a gangster and heroin dealer in real life, and somehow got mixed up with Sheldon and Girdler. He was also in their follow-up, "Project: Kill" and helped produce it. Tragically (but not surprisingly), he was shot to death outside a restaurant a few years later in true gangster fashion.

"Sheba, Baby" was a major hit in theaters, even though it is often cited as one of Pam Grier's weaker vehicles when compared to her similarly themed action films "Coffy" and "Foxy Brown" (both made by Jack Hill for AIP). This is fair, and it certainly lacks any iconic moments that really burn into a viewer's mind.

Despite this being a second or third tier film, it remains an important part of Grier's career, as well as Girdler's career, and there seems to always be a new generation of fans searching out every last AIP picture. Arrow Video has wisely picked this one up and given it the star treatment.

The Arrow disc has not one, but two audio commentaries. One with writer-producer David Sheldon, which offers incredible insight on AIP, Pam Grier and even legendary director Jack Hill. Heck, some of his detours are more interesting than his recollections of "Sheba", such as how he clarifies that "Grizzly" was not technically a "Jaws" ripoff because "Jaws" had not been released at that point. Heck, even Sheldon's involvement in "Last House on the Left" is discussed!!

We also have an in-depth retrospective on Pam Grier's time at AIP. Did you know that Grier was working as a switchboard operator before being discovered by Roger Corman and Jack Hill? Amazing!

Blaxploitation Girdler style has Pam Grier leaving Chicago and heading to Louisville when she hears a bunch of thugs are trying to push her father out of his business. Soon dad is shot dead and it's up to Grier to track down the killers and put an end to them. Once again, this isn't the greatest film in the world and it's certainly not an Oscar-winner but if you enjoy the genre and what it has to offer then you're going to be able to enjoy what's here. I was a little hesitant going into a PG-rated blaxploiation film but the screenplay offers up enough action to keep things moving even though I'm sure fans of Grier want the R-rated action that comes with the nudity. Grier is as tough as ever here and she really turns in another winning performance. What always amazes me about her is how much fire and energy you can see her burning even if she's just standing around not doing a thing. Then, when it's time to fight, that energy just erupts like a volcano and one can't help but respect that energy she brings to a film. The supporting players include Rudy Challenger, Austin Stoker and Dick Merrifield but there's no doubt that the film belongs to Grier. Having lived in Louisville for many years, the film gave me even more entertainment than it probably will from someone who has never visited the city. There were several locations that I recognized and that's always going to add a little bit more charm to a film for someone. The movie does go over the top in its violence and I was a little surprised to see more of the red stuff than I was expecting. Of course, being a blaxploitation picture we've got to end the film with a wild chase and shoot out and that doesn't disappoint here either. Seeing Grier in a wetsuit never hurts either.